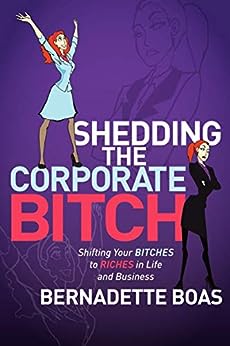 Shedding the Corporate Bitch: Shifting Your Bitches to Riches in Life and Business

For twenty-five years she was a corporate bitch, and now has shifted from bitch to rich! “Do you have any idea how hurtful you are to people?” Linda asked. She shook her head and did everything she could to avoid eye contact with me. I looked across the room at Sheila, searching for some validation of what Linda had said. All I could see was her slumped in her chair, sitting silently as Brian talked in her ear. As a young woman, Bernadette Boas was anything but a bitch. Raised by loving, Irish Catholic parents in a Philadelphia suburb in the 1960’s, she was the middle child of twelve--a sassy, precocious girl with big dreams of a big life. At the age of eighteen, Bernadette left home with the love and support of her family and headed South to Boca Raton, Florida, where she began to climb the corporate ladder. There, amidst palm trees and sandy beaches, the sun began to set on her once glowing personality. A driven, ambitious young woman, Bernadette began to emulate the negative, competitive attitudes of her coworkers--men and women--in her quest for success. She gained a reputation for being aggressive, demanding, and brash. Through hard work and perseverance, she attained tremendous success and achievement through managerial and executive positions, but it came with a price. Eventually, she lost her six-figure corporate job and her bitch persona. "Shedding the Corporate Bitch" is one woman’s real-life admission of what it’s like to sell one’s soul in exchange for ambition, greed and power at home and in the workplace. Its one woman’s apology to all the people she hurt over the years in pursuit of those goals. But most importantly, it’s her lessons, tips, and advice for aspiring corporate women who erroneously believe that ‘manning up’ and becoming a bitch in order to achieve career success that is valuable.
Got A Question