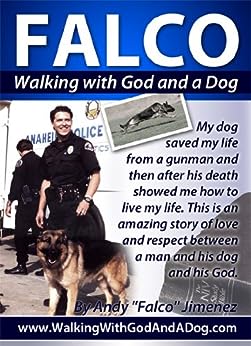 FALCO: Walking with God and a Dog

FALCO was a police canine for the Anaheim Police Department in California. This dog would have an extraordinary impact on his handler, the author Andy Jimenez. Not only would he save his life from a armed gunman, he would later, after his death, teach the handler how to lead his life. This would also lead him to the teachings of Jesus Christ.

In this book you will read about some of the most terrifying, sad and hilarious moments Andy and his canine experienced while patrolling the streets of Anaheim. And then learn how these experiences would paralel biblical and spiritual teachings that you can apply to your life.

As an Anaheim Police K9 handler, the author, Andy Falco Jimenez was originally trained to use cattle prods, tasers and reed sticks to brutally t rain police dogs. He would eventually create a new and humane system for training police dogs, and in the process he learned how to train human's to have a loving and respectful relationship with their dogs.