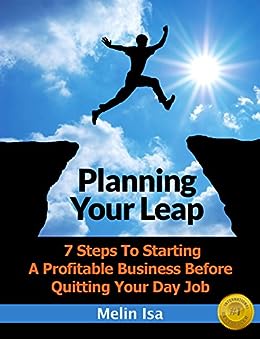 Planning Your Leap: 7 Steps To Starting A Profitable Business Before Quitting Your Day Job

Deciding between being an employee or an entrepreneur is not an all or nothing proposition, at least in the beginning. Steve Wozniak continued to work for Hewlett Packard even after founding Apple with Steve Jobs. At one time he even thought of Hewlett Packard as his job for life! Pierre Omidyar was working for General Magic when he started eBay. He left nine months after he earned more from eBay than his salary at General Magic.

Sara Blakely, the youngest self-made female billionaire, worked selling fax machines while developing her hosiery design that we now know as Spanx. Even though her hosiery line was successfully sold at Neiman Marcus and Bloomingdales, she only resigned from her job once she felt her company was heading in the right direction. Almost three weeks after resigning, she went on the Oprah Winfrey Show to showcase Spanx as one of Oprah's Favorite Things.

Many would-be-entrepreneurs hesitate in taking the leap into business ownership for one of two reasons (and sometimes both): 1. They don't know where to begin. 2. They are afraid of leaving the "security" of a job and consistent paycheck.

Business ownership does have its pitfalls if it is done on a whim, with no strategy or purpose. This book will address those concerns by providing the steps to building a solid foundation for your business, thus reducing the risk and improving the chances of your business thriving. These steps should be taken well before actually leaving your job. This book will also cover topics that many other books on "how to start a business" gloss over.

So, can you do this? Can you make the leap from employee to entrepreneur? Let's plan on it!