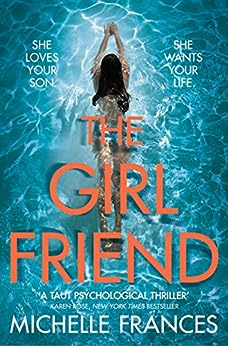 The Girlfriend: The Gripping Psychological Thriller from the Number One Bestseller

‘I was blown away. The Girlfriend is the most marvellous psychological thriller . . .’ - Jilly Cooper

The Number One bestselling debut thriller from Michelle Frances.

She loves your son. She wants your life. How far would you go to protect your son?

Laura has it all. A successful career, a long marriage to a rich husband, and a twenty-three year-old son, Daniel, who is kind, handsome, and talented. Then Daniel meets Cherry. Cherry is young, beautiful and smart but hasn’t led Laura’s golden life. And she wants it.

When tragedy strikes, a decision is made and a lie is told. A lie so terrible it changes their lives forever . . .

The Girlfriend by Michelle Frances is a gripping and chilling debut psychological thriller – the story of a mother, a son, his girlfriend and an unforgivable lie.