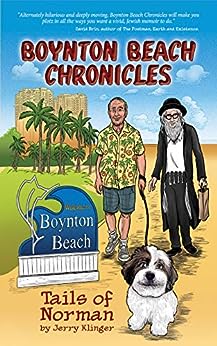 Share
“Would I kid you? I’m telling you these pickles are the freshest since the Carnival Flea Market opened,” the pickle man said. “$1.50 a fat pickle, a real bargain,” he emphasized with a finger.
The pickle man stood hovering over his five full-sized wooden barrels filled with pickles or pickled tomatoes, “or God knows what,” I thought observing the scene from the side.
His potential client sniffed the air and stared into the gray-green briny mixes.
“Fresh? Fresh since when? Carnival Flea Market opened fifteen years ago,” the prospective buyer said. “Fat? My grandson’s pulke is fatter than that, and he is undernourished. You have got to be kidding, $1.50 a pickle?”
Boynton Beach life is funny. I am not kidding you. The conversation really happened.
I grew up in Washington, D.C., mostly in the suburbs of Maryland. I am a Southern Jew. New Yorkers like to point that out. I am a Northern Jew to Southerners. One of my sons married a girl from South Carolina. He was forgiven for being a Yankee because we were from a border state. Honest to God, my son was issued a temporary Southern Passport under his Chuppah.
I did not grow up with this friendly type of bargain-basement bargaining. We never had a deli where the clientele complained the Rugelah was better in Brooklyn, and a sharp retort came from the guy behind the counter, “then go back to Brooklyn, these come from the Bronx.” To me, Brooklyn, the Bronx, are all the same thing, New York.
We have two seasons in Florida, not four. We have snowbird season and not-snowbird season. Sometimes we throw a hurricane in just to help delay the first season from starting too soon.
O.K., so the people are funny. But in Boynton Beach, funny is everywhere. Just keep your eyes open. After leaving the deli with my wife’s requested, treasured, deliciously fresh, onion pockets, I exited right, unto Boynton Beach Blvd.
I’m not making this up. You exit right, and the first driveway you pass is the entrance to the Jewish Funeral home and Funeral Chapel. Next to it, on the same driveway, a hundred yards back is…hold on…a U Store It Air-Conditioned Temporary Storage business. The hearse is under the marquee awaiting.
The mind goes to the U Store It Air-Conditioned Temporary Storage business. It is 75 degrees in Boynton Beach. It is bitter winter up North. The airports are snowed in. Most of the family could not make it down for the funeral. Jews have to be buried, as in real quick, 24 hours.
Without missing a beat, I understood why the U Store It Air-Conditioned Temporary Storage business is located so close to the funeral home. If the family can’t make it down because of the winter due to the snow and ice storms, uncle Shmuel can be stored until the spring, temporarily, in air-conditioned bliss. So much for religion.
It is impossible to get home without laughing all the way.
The point is people and life are funny here. Things can be serious too. Southern Florida has the largest population of Survivors of the Holocaust outside of Israel.
Boynton Beach, in a space of just miles, offers the richest Jewish world you can imagine. Actually, that is unfair, Boynton Beach is not just Jewish. Italians are packed in here pretty well too. Jews and Italians get on well together.
The Boynton Beach Chronicles, Tails of Norman, was written over a period of years and over a changing period of moods. Yet, it was written in fun, observing the foibles, the ups, and downs, from the perspective of an outsider insider. All I had to do was look.
Writing keeps me busy. My kids think I am practicing for the Community Shuffleboard championship. I tell them, and they believe, we spend our weekends clipping coupons for early-bird discount dinners and be-home-before-dark specials, to be used during the rest of the week.
Got A Question