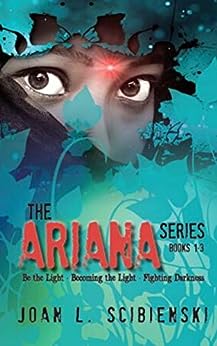 The Ariana Series Books 1-3: Be the Light, Becoming the Light, Fighting Darkness

Every Human Holds the Secrets of the Universe...the Survival of the World Depends on Unlocking that Power.

THE ARIANA SERIES, Be the Light, Becoming the Light, & Fighting Darkness, is now available as a collection. Though a fiction series, these books teach important spritual concepts that humanity needs to understand as we navigate such difficult and critical times.

Growing more psychic and powerful with each passing day, college freshman Ariana Abrahams must become the spiritual warrior she is meant to be. She has no choice. “The Darkness” is growing—its power engulfing the planet—spreading pain, suffering, violence. Even the Earth itself is responding to this negative energy as cenvironmental catastrophes become commonplace.

It will be up to Ariana and her seven psychically-talented friends to decipher truth from lies and to discover their vast inner power. Individually, they are frightened misfits. But if they can work together, learning to trust each other while conquering their own demons, they will find the strength to combat The Darkness.

Their power is growing just as the world is spinning out of control. Will it be enough to defeat an enemy as powerful as it is frightening? Ariana and her friends must unlock the full potential of their power before it’s too late. The survival of the world depends on it.