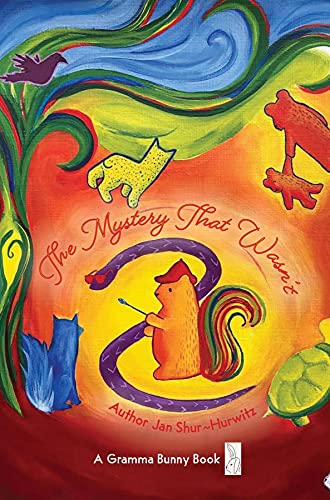 The Mystery That Wasn't

A comedy of animals, led by Chagall the squirrel, a painter and part-time detective and his pal Sabout Tour the snake.  They are side-tracked from

pursuing the charitable deeds their village has undertaken, in order to search for the black bear cub, BeBop.  He has vanished from under the close watch of his parents, during a picnic celebrating the successful distribution of care packages to the needy.  Foul play is suspected, as Chagall organizes the village to uncover the truth about BeBop.

Chagall is a philosopher of sorts and cautions the Lamina villagers not to imitate the sometimes awful behavior of humans, when dealing with the other creatures of the forest.  "Act like the decent and polite animals that you are" is his oft repeated motto.

When proposing his new idea to cook, prepare and deliver the offerings,  Chagall reminds them that they are all a community, who must watch out for one another.  "No only your own friends and family, but those whom you would otherwise consider competitors or even enemies.

Even the trees and animals protect each other and warn of dangers.  The young animals, fledglings and insects all have a safe place to frolic, caper and imagine in The Gentle Forest, where adults need a special permit to enter.

After a job well-done, Chagall congregates all the Lamina villagers to celebrate with a picnic the following day. Most of the animals fall into line and graciously participate in both events, but not all.   This causes suspicion when BeBop, eldest cub of the black Bears', disappears from the picnic.  Worry ensues.  Almost everyone, it seems, pitches in to search for the lost cub, but without success.

As Chagall and Sabout Tour, known for their mishap and trouble-solving skills, plunge into action, we see the creative directions that they employ.  But this mystery throws a wedge into Chagall's idea of fellowship among animals.

This doesn't stop him or his shrewd partners from leaving no stone unturned,  investigating everyone and everything.  He trusts and depends on Sabout Tour and many other villagers, such as Caw-Caw-Willy-Willy the crow, who acts as messenger and scout.

What happened to BeBop?  Was a crime committed?  Who is to blame?

In the pursuit of BeBop's disappearance and final discovery, Chagall learns a few lessons himself, along with the rest of the Lamina villagers.