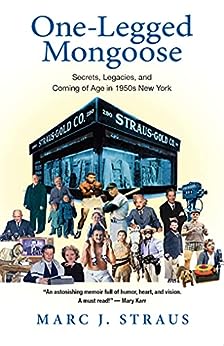 “Marc Straus has written an astonishing memoir full of humor and hilarity, heart and vision. This year’s sleeper hit, I predict. A must read!”—Mary Karr, author of The Liars’ Club It's June 1953, and 10-year-old Marc Straus is in his mother's car, getting sick from her cigarette smoke on his way to a Hebrew lesson. He and his younger brother, Stephen, are transferring from public school to a Yeshiva. His parents haven't said why they're transferring - the family isn't religious. So all Marc knows is he'll have to protect his brother. Stephen's a delicate kid other kids pick on. Marc's a street fighter who knows how to wall off the pain. So begins One-Legged Mongoose , Marc Straus' vivid, compelling, you-are-there memoir of two years in the life of a precocious, scrappy Jewish kid carrying a dark secret as he embarks on the journey to young manhood in 1950s New York. When school starts, Marc begins commuting four hours daily to a different world, where kids are smart like him and fight with words instead of fists, and a caring principal takes the troubled truant under his wing. Marc works at his dad's textile store on Sundays, learning about honor and hard work from his immigrant father. At home, he faces his volatile mother. Straus encounters Anti-Semitism in public school, in the community, and even in the Boy Scouts. And it's the Scouts that lend the book its title—a nod to a campfire story about a half-man, half-mongoose predator that's almost the height of a full-grown man, and that Straus and the other boys of Troop 300 are tasked with locating. But, as Straus explains, "I was willing to face it. I know all about monsters." Marc starts rethinking his risk-taking way of life, often sidelined by injuries to his eye, polio, and a near-fatal hit-and-run. A voracious reader, he looks to books for insights - What would Santiago do? - and comes to accept that he's not invulnerable. Life will wound him, but the rest is up to him. An unflinching look at child abuse and one boy's ability to rise above it, One-Legged Mongoose reminds us of the bonds between siblings and the power of family secrets.
Got A Question