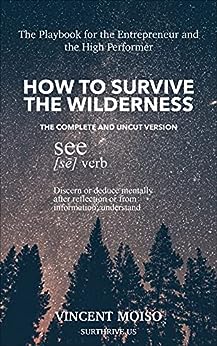 How to Survive the Wilderness: The Playbook for the Entrepreneur and High Performer

The inspiration for this three-part playbook for the entrepreneur and the high performer is a culmination of my education, hundreds of hours of self-development and professional development, and years of experience as a successful entrepreneur.

Taking all the nuggets from my top ten must-read books, I aggregated all the content along with that experience to make it easier for the entrepreneur and the high performers to find a direct path to growing themselves, the people around them, and their respective businesses.

After my father passed away in 1996 at the young age of 62 from a four-year battle with early on-set Alzheimer’s, I had packed up all the guilt and grief from his passing into a neat little ball and buried it as deep as it could go. I spent the next sixteen years adopting stoicism as a tool for an international business career, never getting vulnerable and mostly being a chameleon in just about every situation. I was almost forty before I realized the damage that it had done to me personally. I was no longer me, and I was exhausted. It was time for a change, and that needed to start with some much-needed self-development. It was time to exit the business I was in and move on to a different environment.

Since the end of 2013, I have been coaching many businesses, entrepreneurs, and high performers. Several years ago, I even took an equity position with one of my clients and became the president of that business. My business partner and I have done some amazing things with that business, from multiple acquisitions to completely turning around a 28-year-old company and setting it up for a potential eight-figure sale. That is no small feat, and it got me thinking that many small businesses, entrepreneurs, and high-performers are neglected or simply don’t have the resources to access the tools that have contributed to my success.

In most cases, they don’t even know these tools even exist. About 67% of businesses with employees only last for two years, while less than 50% of businesses last five years, putting the majority of those entrepreneurs in survival mode, working hard to hopefully thrive someday. Only 4% of businesses in the US make it $1 million of revenue, while even less make it to $10 million.

If you had a road map to get you there a little quicker, would you want it? That’s what SurTHRIVEal Gear and this book is all about. It is a road map to go from just Surviving the Wilderness to Thriving in your life and in your business.