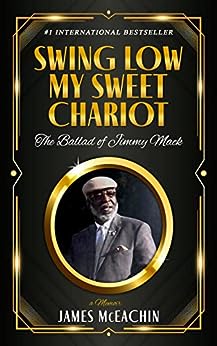 Swing Low My Sweet Chariot: The Ballad of Jimmy Mack

#1 International Bestseller in SIX categories in THREE Countries, including US, CA, and AU. Korean War History in US. Korean War in CA. Biographies & Memoirs of Authors, Vietnam War History, United States Veterans History, and Korean War History in AU. The road has been hard, and the road has been long.. . In his own words comes the song of James McEachin's his-story , his early years were spent in segregated North Carolina where he had few opportunities to know what was beyond the cotton fields and shanties of Rennert. The move to Hackensack, New Jersey opened his eyes to new possibilities and there he fell in love with the uniform, joining the Army at just 17. It was during his second hitch that he would experience the darkest of days, the horrors of war, when he almost died in a field in Korea. Returning to Hackensack he went on to wear both a fireman’s uniform and a policeman’s. But there were other challenges and opportunities in California, so he followed his destiny to Los Angeles. On an impulse James became part of the growing music scene, writing, producing, and finding new talent. He also picked up a new name along the way, Jimmy Mack . A twist of fate, somewhat fueled by James’ recalcitrant ways, had him on yet another road, one that led to the Silver Screen. Being in the right place at the right time served to get James onto both the big and small screens of Hollywood. He appeared in almost 200 TV shows and movies. Always a man of words James began to write and his first novel, Tell Me A Tale , was an award winner. He has gone on to write six more books, as well as multiple screen plays. Swi n g Low, My Sweet Chariot: The Ballad of Jimmy Mack transports the reader past the racism of the day, and its seemingly impossible odds, placing the reader squarely into the reality of a life well-lived and a country well-served in this timeless tale of James McEachin and the band of angels ushering him through every stage.
Got A Question