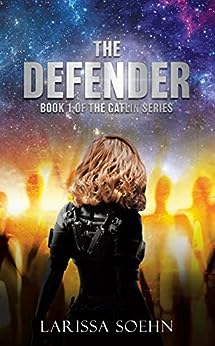 A woman battling depression and anxiety finds herself trapped in her own life, but when an alien device rips her away from Earth, she is forced to fulfill an impossible role and save the galaxies from destruction.

On Earth, Alexia Harmon is a mother and wife, but in a foreign galaxy, she is so much more. Torn away from her family, Alex is in an epic battle to escape from Gatlin and return to Earth. But little does Alex know, Gatlin is on the verge of destruction. The galaxy faces annihilation; a prophetic doom that was set in motion thousands of years ago.

Alex struggles to stay alive as she fights against an alien government that is trying to kill her, a species of genetically engineered creatures that are hell bent on her destruction, and the demons of her own mind that threaten to overthrow her. Join Alexia Harmon as she works to fulfill her role as THE DEFENDER.