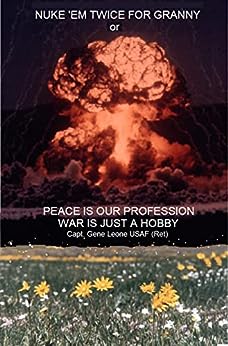 Nuke ‘em Twice is mostly a fun book filled with many funny stories covering a multitude of people and situations from stories shared while on nuclear alert and at social gatherings. It is also the story of crew, R-17 and Capt. Don Hanson, the pilot and Aircrew Commander.
The setting for the opening chapter, for alert force, is Red Flag, an Air Force training area in the Nevada desert where pilots and aircrews learn air-to-air combat and bombing tactics. On this, what was supposed to be Donny’s final mission in SAC before transferring to the Pentagon, something goes horribly wrong. While flying low level, a vulture appears in the windshield causing Capt. Hanson to nose the aircraft down in the hope of avoiding the bird. With just a tad more altitude, he might have saved his plane and crew.
It has been said one’s life flashes before their eyes in the moment of death as time all but stops. As Don relives his life in its final moments, memories of acts of courage, cowardice, love, hatred, anger and joy fill his every thought and emotion. And you, the reader, will experience every one of those emotions and more. A pacifist by nature, Donny Hanson once considered leaving the Air Force and becoming a man of the cloth but stayed in the service to keep the peace by preparing for war.
But the primary reason for writing this book was the nuclear incident of February 1, 1979 of which there was nothing funny or humorous about it. The Incident is a story that needs to be told to right the wrongs of those covering up the facts to protect their own butts and incompetence.
Sometime during the night of January 31 and-or the early morning of February 1, 1979, a person or persons accessed an alert nuclear B-52 bomber at Warner-Robins AFB, Georgia. Was it the Security Police on duty shirking their duties or was the vandalism to the bomber and weapons the result of someone else successfully penetrating the secure alert area? The answer lies within the pages of Nuke ‘em Twice where you will learn the whole story. Parts of The Incident have been fictionalized but the events are as they occurred including the botched investigation resulting in the ruination of numerous military careers for both officers and enlisted troops alike. The Incident covers four chapters and tells the story the military, the press and media neither could nor would tell. With the exception of the names of the players, The Incident was written as it happened with minimal embellishments.
Nuke ‘em Twice is a fun book which will tickle your heart and yet touch every human emotion there is. For instance, Capt. John “Mad Matt” Matthews is a Russian linguist; something he put to use flying a Busy Observer mission against the Soviet flagship Moskva. The international diplomacy between a B-52G making a series of low level passes over a Soviet warship is reminiscent of Tom Cruise communicating with the aggressor pilot over the Indian Ocean. There is nothing funny about the nuclear incident, however, or when Matt’s friend, Patty O’Shae, learns how Matt’s brother died in his arms in Vietnam and retells that story to Matt’s crew. And then there was the SACofficial virgin sacrifice in Hawaii, a story I will neither confirm nor deny any and all the events therein other than to say it is a running gag throughout the book. All I can say is the authenticity of the story of the virgin sacrifice is a definite maybe.
Got A Question