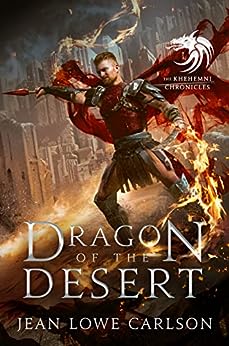 Dragon of the Desert (The Khehemni Chronicles #1): An Epic Fantasy Adventure

Born to rule, tormented by fate. Can a deposed king save his world from ruin – or is he doomed to destroy it? In a desert land where magic reigns supreme, one nation stands as its protector – Khehem, crown jewel of the Thirteen Sun Tribes. Beloved prince of Khehem, Leith Alodwine is a ferocious warrior of the Wolf and Dragon, a conflict magic deadly in battle. But the ruling Order of Alrahel fear the king Leith is becoming. Like his grandfather the Red Tyrant, Leith’s furious power has the ability to protect his nation from any threat – or tear down the world. As an evil magic rises, Leith must face the threat for all the Sun Tribes. But to what lengths will he go to stop it? And to what lengths will the Order go to stop him? Discover the exciting new prequel series to The Kingsmen Chronicles , from a #1 Amazon bestselling author in Epic Fantasy and Adventure Fantasy. A complex world of treachery, war, and magic, readers who enjoy Robert Jordan’s Wheel of Time , Patrick Rothfuss’ Kingkiller Chronicles , George R.R. Martin’s A Game of Thrones , or Andrzej Sapkowski’s The Witcher will love this fantastic adventure.
Got A Question